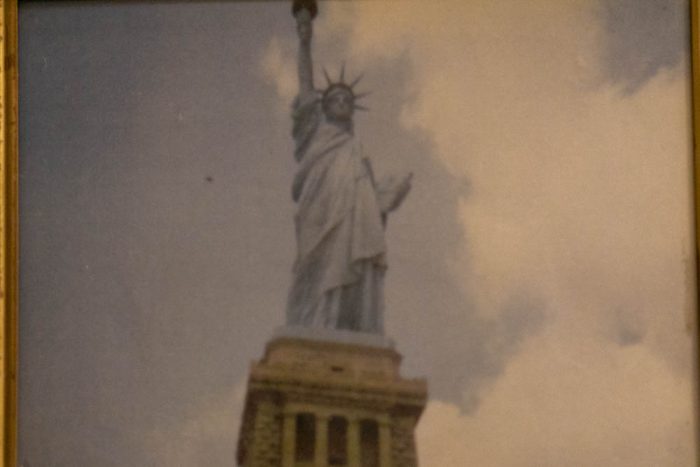 For the past 20 years, a photo has sat on my desk at work

This photo is not spectacular, or remarkable.  It is a photo taken by a 10-year-old boy on the ferry in NY heading out to Ellis Island.  It was shot with a disposable camera, it is fading, but it is a memory embedded in my mind.  The photo is of the Statue of Liberty.  The photographer was my son, in April 2000, 17 months before 9/11.

We were driving back from a trip to Virginia and had detoured to New York.  Both boys, 9 and 6 had always been history buffs, and we had been to Fort McHenry, and the Battle of Manassas on an Easter Visit to relatives in Va, and DC.  My oldest loved taking photos and snapped away on the ferry capturing the NY skyline, complete with the Twin Towers and the Empire State building.  They both felt the impact of Ellis Island and what our ancestors experienced when they arrived in America.  We had talked about going back soon to go into Manhattan.

We never got the chance.  You see, my little boy, with his blond curly hair, and big blue eyes that would run to greet me when I picked him up from school, lost that innocence on 9/11.  Today marks the 20th anniversary of 9/11.

Everyone is asking where were you on 9/11?

The day started like any other school/workday.  I awoke with the boys and took my shower while they ate their breakfast.  My husband always slept in an extra 1/2 hr.  B had just started 6th grade 2 weeks prior at the middle school around the corner from the group home for developmentally disabled adults I managed.  He had to be in early, so I would take him and start my day.  A would ride into the Elementary school with dad.  As I dropped him off, he gave me a big hug and jumped out of the car.  He would walk after school back to the home so he could visit before we picked up his brother.  I had been working there since he was born and my clients loved him.

I went to work and the morning routine of getting everyone up and showering was in full swing.  The house was noisy, with 4 staff and 8 adults with various physical disabilities.  Peaceful chaos we called it.  A coworker was due in at 9 and was always early.  She walked in at 8:55 and immediately I noticed something was wrong.  She was in a state of shock, completely white, and kept saying I can’t believe it, turn on the TV.  We turned on the TV just as the second plane hit the Tower.  Stunned, we stood there for what seemed like hours, staring and watching.  Most importantly praying.

The house was eerie quiet that day.

We kept the news on.  Several of the clients were glued to it.  All were stunned.  Even those who had their routines and would normally get upset with changes seemed to feel what was going on.  We went through the motions of our day and around the time B was to get out of school, I told everyone I was going to walk over and meet him.  I just needed my boys and needed to have them home and safe.

As I was walking to the school, I saw him walking towards me.

The neighborhood usually alive with children’s chatter was quiet.  The kids were walking with blank stares on their faces.  They had watched the footage at school.  My boy, 2 days shy of his 11th birthday, who would normally rush to greet me, was staring at the sky.  As I reached him he looked at me, and said very seriously “mom, it’s so quiet, there are no planes, and even the birds know not to make noise”.  I hugged him tight, but I was no longer hugging the innocent boy I had dropped off that morning.

I was hugging a young man, who had just witnessed the most horrible event in both our lifetimes.  B and I walked hand in hand back to the group home, where he hugged everyone in turn.  We sat together until it was time to pick up his brother, and he walked out the door in front of me.

A moment etched in my brain, my son, always wise and mature for his age, had realized just how cruel the world could be.  My heart skipped a few beats and ached for him to remain innocent a little longer.  Luckily, the younger children did not know what had happened that day.  The signs of shock were apparent in the teachers and other parents faces.  Children were hugged much harder than normal on pick up and everyone made their way to the safety of their homes.

I don’t remember cooking dinner that night, or even how we celebrated B’s birthday 2 days later.

I know we did.  That first night at the dinner table, he looked at me and asked very matter of fact, “do you think anyone survived?”.  I gave him the most honest answer I could, “I don’t know, we can only pray.”  He wanted to light a candle and leave it outside as a sign of hope.  Many of our neighbors were doing the same.  The candle stayed out until the searches and recovery were called off.  We tried not to expose the boys to the news on the television, but B collected every article he could.

I encouraged him to make them into a scrapbook as a way of coping.  He did.  Months later that I noticed the NYC photos were missing from the albums they had been in.  He removed them and added them to his scrapbook.  I never questioned why.  It was he, who realized that his brother, who often played using repetitive actions, was building his waffle blocks in 2 towers and knocking them over.  He explained to his brother, that it was a bad thing these men did and it was ok to feel bad, but don’t keep reliving it.  I overheard him.

The boys were filled with patriotism

They were moved by the show of solidarity in the nation.  We had to buy every CD with patriotic songs that came out, including the recording of Congress singing God Bless America and their favorite, Lee Greenwood’s God Bless the USA.  They played them over and over on every car trip. It was a scary, sober time.  I learned I lost a classmate in one of the towers, we had several friends who worked in the City that were fine, but witnessed the attacks from their offices or on the ground.  Other friends and family, were working at ground zero or the Pentagon with recovery efforts.  And the world came together.

My boys are grown now.  They have become strong, compassionate, intelligent young men.  They know that the world can be unjust and cruel at times.  However, they also know that 1 event can turn your life quickly and shape a generation.