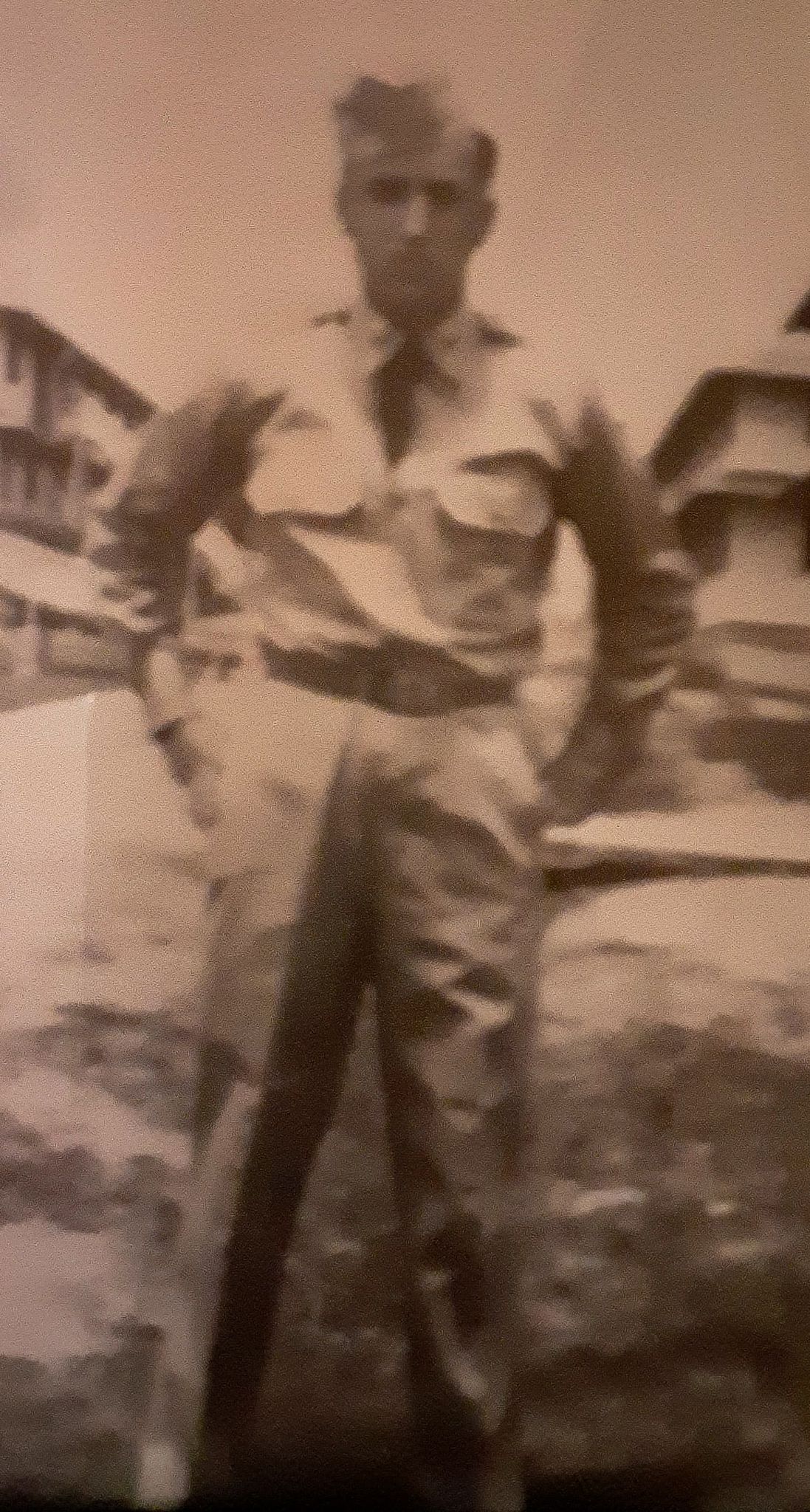 All Gave Some, Some Gave All.  You Are Not Forgotten.

70 years ago today a 19-year-old medic, named Clarence, went missing during the May Massacre in Kungwong So Korea.   My mother had just turned 5 years old and was waiting for her uncle to come home to celebrate her birthday as he had promised.  Instead, in Middlebury, Vt an empty casket lays in a family plot marked with his name.

Clarence was the youngest of 7 siblings.  His mother was just 19 years old (the same age he was) when she married a man 30 years older.  His father died 9 years after his birth and his mother spent time in and out of the State Psychiatric Hospital.  Suffering most likely, from bipolar disorder.

He was raised predominately by his two older sisters, Agnes and Mary.  Later to be known affectionately as the cackle sisters, for the art of bickering they had spent decades perfecting.  Behind the bickering, I could detect a sense of sorrow, guilt, and anger.  They loved each other dearly, of that I am sure, and it would be years before I learned the truth.

As a child, I was curious about my missing uncle.  My Nana’s bookcase showcased her brothers and my grandfather.  Proud in their Uniforms.  My grandfather had been a cook in the army during WWII.  He was a tiny man, quiet, and adored my brother and me to no end.  Sadly he died when I was young, suffering a stroke when I was 5 and he spent 18 months in a nursing home, never regaining his speech.  I would sit on his bed and read to him.

Then there was Lawrence, Larry to some and us kids, for some reason, Uncle Pat. He contracted Spinal Meningitis, (not malaria) and ended up in a Boston Military Hospital. It is speculated that he got bacterial meningitis as a result of a motorcycle accident when he dumped his bike and went under a fence while off to visit his future bride.

Nana and my soon-to-be Aunt Theresa went to Boston to see him as he wasn’t expected to survive. The military had access to a “new drug” and tried it as a last-ditch effort to save him. The drug was penicillin. The drug worked! He went on to marry my grandfather’s sister, and the rest is history. Giving me 3 cousins who treated me as a little sister. He did however lose his sight and hearing on the right and paralysis on the right side of his face. He was always so full of laughter, constantly making us children laugh.   My favorite times as a child were at their house.

Walter was next.  My mysterious Uncle from Chicago.  Uncle wound comes to visit several times a year. He said he could never take a picture without the “little string bean” jumping in.  He would come to my dance recitals, and take me to the store for 3 Musketeer Bars (don’t tell your grandmother.  Like she didn’t spoil us).  He had no children but was married to my Aunt Aline.  The story goes that they were traveling to Florida for their honeymoon and saw a job advertisement for Hamilton Standard.

He applied, got the job, went on his honeymoon, and started his career in Aero Space.  He retired to Fl. until he moved home and passed away in 2012.  It wasn’t until my son was a teenager, and obsessed with military history that we learned that Uncle was not just a paratrooper, but a  member of the “Rangers, Third Battalion,” under Col. William Darby. He was wounded in northern Italy and transferred to Army medical facilities in North Africa. After recovering from his wounds, he volunteered for the “First Special Forces.” He was a member of the “Devil’s Brigade”.  My son had been reading a book on the 3rd Rangers and found his name.

Kenneth was the third son.  Booming Uncle Kenny with his southern accent and enormous bear hugs.  He had joined the Navy young.  My aunt had signed the forms for him.  Thus starting the silent feud that raged for decades to come.  Kenny served in the Navy in Norfolk, Va during WWII.  He met and married sweet Aunt Gae when she was 15.  They were together until her sudden death in 1992.  He died 5 years later.

Arthur was in the Air Force.  He served in Korea.  I never met Arthur, as he was killed in a car accident in St. Louis 4 years before I was born.  I can imagine what he would have been like, knowing my other uncles.  He gave us Aunt Mae, whom he married in England.  Together they gave us Rick, Karen, and Sharon.  The whole family had been in a car accident.  Rick was 8, uninjured, and managed to walk miles to find help.

Clarence was in the 2nd Infantry Division, 38th Battalion.

So back to Clarence.  I would look at these heroes as a child and Nana would be tight-lipped about their war heroics.  But when I’d ask about Clarence, she would only say, he went out and stepped on a mine.  There was always pain behind that statement.  When I was older, I spent quite a bit of time visiting my Aunt weekly.  She would tell me stories about how they grew up.  Their aunt would often care for the boys on their farm in Shoreham.

One day I asked her about what Nana said.  She told me that Nana had signed the papers for Clarence to enter the army at 17.   He was skipping school and spent some time in a boys’ home.  He wanted to be a medic and a hero, like his older brothers.  The 2 girls argued over this.  My great-grandmother was in no mental condition to make a decision, so Nana, being his guardian signed.  He never came home.

I have always felt a connection to my Uncle Clarence.

I read the letters he had sent home.  A young man, seeing countless horror working as a medic.  Clarence was scared the night before he went missing.  The last letter he wrote home told of his buddy who had gone on patrol the night before and didn’t come home.

When I was younger I would imagine him coming home.  His army bag over his shoulder, walking down St. Louis St.  There would be hugs, laughter, and tears for the homecoming of the youngest son.  As I grew older, I knew that would never be an option.  So I begin to research.  I called the Army and requested his records.  I explained to the woman that his oldest surviving sister and brother were ill and I wanted to do something to find him and bring him home.  Technically, I was not his next of kin, but she told me what to do anyhow.  She hooked me up with submitting DNA for Mitochondrial DNA testing on remains.

I joined in informational family gatherings with others searching for answers.  Not only did I obtain his records, but also his Purple Heart, Bronze Star, and a Korean War Medal.  I learned that he had been promoted to Sergeant.  His remains were listed as unrecoverable, however, from reading the field notes and piecing together the details of the 20-day battle, he died a hero, trying to help others.

I know he is guiding me to not give up hope.  4 years ago, my boys and I were visiting my mom and step-dad in Maine.  We went to an old military book store the boys love.  Books and photos are stacked floor to ceiling.  A book caught my eye.  It looked like a yearbook stuck on the shelves labeled Korea.  I read the title and it was a book entitled History 2nd Infantry Division Korea 1950-1951.  I grabbed it with the intent to read it later.

Mom came into the store, as they had gone out about 20 minutes before and the boys were still chatting with the owner.  I handed her the book and said look what I found.  Mom opened the book and when I looked at her she was deathly white, her hands were trembling. She was starting at a photo of a Christmas mass in 1950.  She said she felt a chill and she was sure that one of the men in the photo was Clarence.  I knew he had drawn me to the book to find out more.

Our family has not given up hope, that one day that empty grave will contain his remains.  He will come home to rest alongside his parents and siblings.  On my wrist, I wear a blue bracelet.  An MIA bracelet that bears his name and identification info.  It’s the 3rd one I have had, the other 2 worn smooth.  I have promised myself that the day I stop wearing it, will be the day I lay it in his casket.